Zanzibar is a legendary archipelago in the Indian Ocean, 35 km off the coast of mainland Tanzania. It is just six degrees south of the Equator. Zanzibar is comprising the islands of Unguja and Pemba, along with a number of smaller isles. However, it is one of Africa’s most enticing destinations and exotic laid-back paradise. Zanzibar has miles and miles of white sandy beaches and translucent turquoise warm waters.

Generally the climate in Zanzibar is warm all year round. However, the heat of summer (corresponding to the Northern Hemisphere winter) is often cooled by strong sea breezes. This is mostly associated with the northeast monsoon, particularly on the north and east coasts. Rains occur in November but are characterized by brief showers. Longer rains normally occur from March to May in association with the southwest monsoon.

Unguja (also referred to as Zanzibar) is the largest and most populated island of the archipelago. Unguja is a hilly island, about 85 kilometers long (north-south) and 30 kilometers wide (east-west) at its widest. The overall area is about 1,666 square kilometers and separated from Tanzania mainland by the Zanzibar Channel. Here you can find the International Airport of Zanzibar with Direct Flights from all over the world. Surrounded by a number of small islands, with only two of them, Tumbatu and Uzi, being inhabited. Unguja is the heart of the Archipelago.

Unguja is also home of the capitol Stone Town. Here you see and feel the fascinating and turbulent history in its labyrinth of narrow twisting streets. Visit the bustling bazaars and historical monuments like The Old Fort, Sultan Palace or House of Wonders. UNESCO declared Stone Town in 2000 to a World Heritage Site with the words “it is an outstanding material manifestation of cultural fusion and harmonization”. 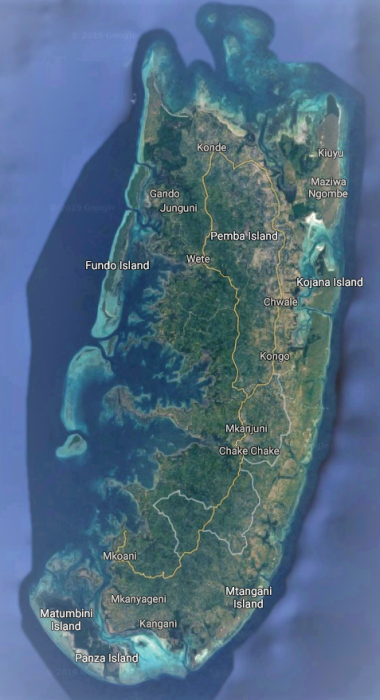 Pemba Island, known as “The Green Island” in Arabic (الجزيرة الخضراء), is an island forming part of the Zanzibar Archipelago, lying within the Swahili Coast in the Indian Ocean. With a land area of 988 square kilometers it is situated about 50 kilometers to the north of Unguja. It has a small domestic airport from where you can reach Dar Es Salaam and Zanzibar International Airport. Most of the island, which is hillier and more fertile than Unguja, is dominated by small scale farming. There is also large scale farming of cash crops such as cloves.

Pemba is truly the opposite of Unguja as it is still very remote, pristine, not many tourists and just a hand full small hotels. It is very well known for diving and deep sea fishing.

Mnemba Island is a single small island located about 3 km off the northeast coast of Unguja, the largest island of the Zanzibar Archipelago, Tanzania, opposite Muyuni Beach. It is roughly triangular in shape, about 500 metres (1,640 ft) in diameter and about 1.5 kilometres (0.9 mi) in circumference. It is surrounded by an oval reef seven by four kilometres in extent. These reefs have been declared a Marine Conservation area. Mnemba Island and its reef are sometimes called Mnemba Atoll which is incorrect because an atoll is an island that encircles a lagoon, which is not the case for Mnemba Island.

Mnemba Island is a popular scuba diving site, with a wide variety of corals and associated species, as well as occasional sightings of larger species such as turtles and dolphins. Calm conditions are most frequent in November and March, with maximum visibility. As Mnemba is a private island, non-guests are not permitted to land on the island. The island has a 200-meter exclusion zone around the island within which non-guests are not permitted. 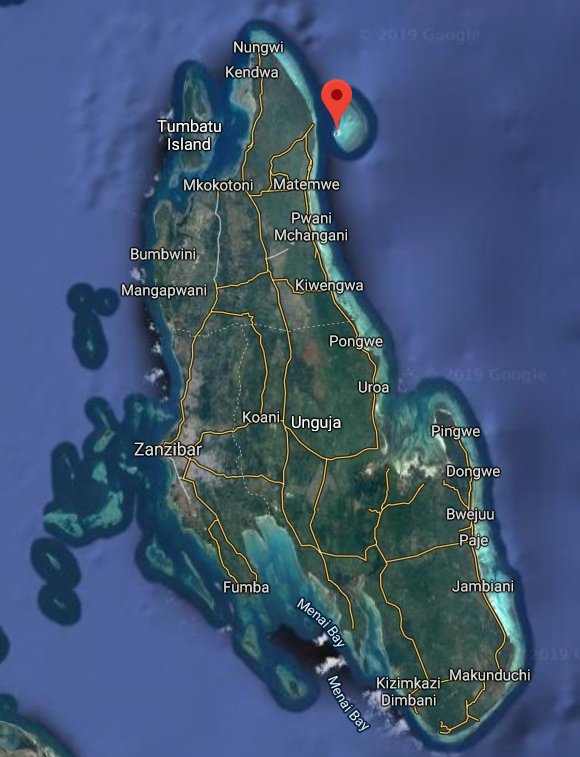 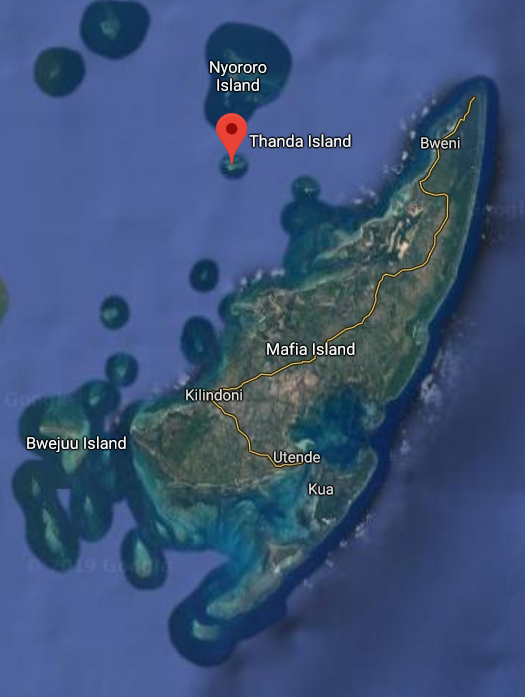 Nestled within Tanzania’s Shungimbili Island Marine Reserve, Thanda Island is 8ha in size, 1,1km in circumference and 350m wide. It is 16 nautical miles or 30km east of the mainland of Tanzania, opposite the Rufiji River Delta, and located between the mainland and Mafia Island. (The name ‘Mafia’ is derived from the Arabic morfiyeh, meaning group or archipelago, and from the Swahili mahali pa afya, meaning a healthy dwelling-place.)

Thanda Island is 7 degrees south of the equator and in the East African Time Zone, which is one to two hours ahead of the Central European Time Zone. It is surrounded by coral reefs, which protect the Island from massive waves and heavy seas.

Mafia Island (“Chole Shamba”) is an island in Tanzania. As one of the six districts of the Pwani Region, Mafia Island is governed from the mainland, not from the semi-autonomous region of Zanzibar, of which it has never been considered to be a part politically.

According to the 2002 Tanzania census, the population of the Mafia District was 40,801.[1] The economy is based on fishing, subsistence agriculture and the market in Kilindoni. The island attracts some tourists, mainly adventure scuba divers, game fishermen, and people wanting relaxation.

The Mafia archipelago consists of one large island (394 km²) and several smaller ones. Some of the smaller ones are inhabited, such as Chole Island (2 km²), with a population of 1415. Chole Bay, Mafia’s protected deep-water anchorage and original harbour, is studded with islands, sandbanks and beaches. The main town is Kilindoni. The stretch of water between the deltas of the Rufiji River and the island is called Mafia Channel.